After being absorbed with domestic comforts for much of the pandemic, Jonny Johansson was ready to hit the great outdoors with his fall men’s collection for Acne Studios.

The lineup was inspired by the mismatched outfits of nomadic people, though Johansson rooted the looks in Scandi tradition with sturdy knits and outerwear inspired by the indigenous communities from the north of Sweden, where he grew up.

The designer has ended up embracing many of the things he found corny as a teen, not least the traditional beak-toed Kero boots his mother made him wear. “She’s kind of rooted in the ‘60s and ‘70s, so she kept it quite real,” he recalled. “So I had a double interest in those, you know: both hated them, and now I sort of love them.”

He collaborated with the historic Swedish brand on several styles, including a pair attached to leather chaps.

The designer is a major music fan, so he threw in a dose of glam to liven up his lived-in coats and distressed suits, which included a crumpled tuxedo with a denim lapel. A sequined turquoise shirt was topped with a crafty knitted bib, while patterned lurex pants were matched with a fuzzy brown fleece jacket.

And while street juggler-style patchwork brocade pants may not be up everyone’s alley, the collection offered up plenty of handsome and unusual winter coverups, subtly embellished with decorative buttons that gave them a faded heirloom feel.

Acne Studios Does Comfort Dressing for Fall and Yes, There Are Clogs 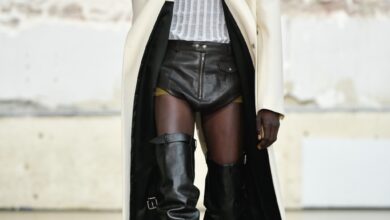