Images & video by © E.Stichelbaut / polaRYSE / GITANA S.A – Release , photos & vid sent by Gitana Team Media www.gitana-team.com/en/ – Alex Thomson’s antics are great, but how anyone can surpass this above?

The French Sailors & Designers & Builders are #1 .

Saturday, July 17, 2021 – 4 years ago to the day, the Maxi Edmond de Rothschild, the pioneer of a new generation of oceanic maxi-trimarans, was first unveiled and launched into the salty water of the Gulf of Morbihan. The fruit of some 170,000 man-hours, including over 35,000 hours of study, the 32-metre Verdier design certainly drew the eye with her planing hulls, her well-crafted aerodynamics and appendages intended to sate an irrepressible desire to clear the way for offshore flight. From the moment she left the yard, the tone was set with Ariane and Benjamin de Rothschild’s vision plain for all to see! The livery designed by American street artist Cleon Peterson added the “je ne sais quoi” to the remarkable personality of this new craft, the twenty-eighth of the legendary Gitana saga.

To celebrate this anniversary, the five-arrow team were keen to share an exclusive video filmed just a few days ago off Lorient with the help of the kitefoilers from the Lorient Glisse et Foil association. In addition to the very fine images the polaRYSE teams are treating us to as privileged witnesses of this top-flight session, the most striking element of these few minutes testify to the fact that passion, state of mind and willpower are still as strong as ever in the day to day actions of the Gitana Team’s members: breaking the codes of the sport, pushing the envelope in terms of flight and relentlessly breaking new ground and striving for excellence in a bid to imagine what tomorrow will bring.

They share the same playing field offshore of Lorient, between the Gâvres peninsula and the Ile de Groix, and above all the same passion for foiling, speed and flight! The encounter between the Maxi Edmond de Rothschild and the kitesfoilers from the Lorient Glisse et foil association, of which Maxi crew member Morgan Lagravière is one of the mainstays, was a must.

Foiling contest! Under the instruction of Franck Cammas and Charles Caudrelier, the crew of the Maxi Edmond de Rothschild were up for a challenge. On the programme, speed runs and aerial displays by the kitefoilers, who had a crack at tow-in foil surfing at over 30 knots in the wake of the 32-metre giant. Adrenalin and thrills guaranteed!

About Association Lorient Glisse & Foil
Created on 27 June 2019, the ALGF (Association Lorient Glisse & Foil) is the body that liaises with various towns, local administrations, watersports centres, as well as the region’s commercial protagonists. The aim of the association is to make our boardsports spots safe, develop free practice and encourage the organisation of competitions. Pierre Canevet and Billy Guy-Maupas, president and vice-president of the association, ranked among the kitefoilers taking part in this extraordinary foiling session. 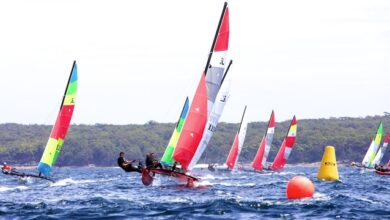 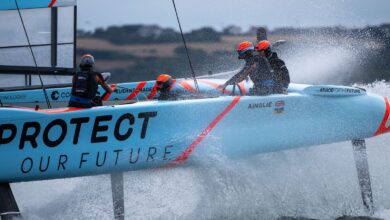 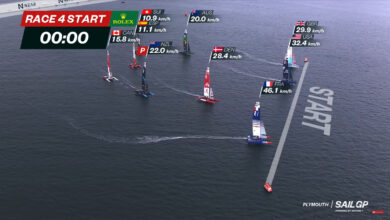